THE LAST OF THE FEW AND THE MANY
BY JEREMY HOUGHTON

​​It is hard to imagine, impossible even. Across from me would be seated a man, over 90 years of age. Often he would rest quietly. Calmly, he would submit to the process of sitting for a sketch. And yet, before me would be someone who a lifetime ago engaged every sinew and sense, every faculty including his very last ounce of courage, to defend the skies above and land below. The contrast of our shared setting with how the subject I was sketching would have been and had to be amid the sound and fury of battle during the Second World War could not have been more extreme or profound.

In all, shared moments with four men who flew Spitfires and Hurricanes, and seven who partnered Lancasters. They are the Last of the Few & the Last of the Many, respectively, as well as the bravest of the brave. All have lived the fullest of lives and nobly served, which in turn made possible the life that we live today that would be unimaginably different without the courage they showed.

My brief was to commemorate their service through portraits and sketches that will outlive us all. A permanent reminder; (lest we forget). In meeting this aim, it has been my privilege to share time with the likes of Geoffrey Harris Augustus Wellum and Thomas Francis Neil. Likewise, Paul Caswell Powe Farnes, John Francis Durham Elkington and, George Leonard “Johnny” Johnson, the last of who has outlived all those others who were part of the 617 “Dambusters” squadron’s extraordinary heroics. I had the honour of visiting them at their homes where they enjoy what remains of the day, and sitting quietly with them to sketch, and sometimes to listen.

​My hope was simply to try and capture, in the uncomplicated and straightforward terms that they prefer, the sense of service, courage and bravery they showed so that what we have today is a country in which we can take pride. During these sittings we might talk of what were their days in the sun. Without me, their minds might well drift back to those moments when they took to the skies. With me, while I struggled to capture their faces and give a sense of the depth and scale of their service, I would ask them to recall those days. Their almost matter of fact attitudes to what by any measure were extraordinary heroics reflect how they modestly underplay their own personal contribution to the defence of many privileges that we now take for granted. With every sentence of self-deprecation they utter, our appreciation of them should grow. 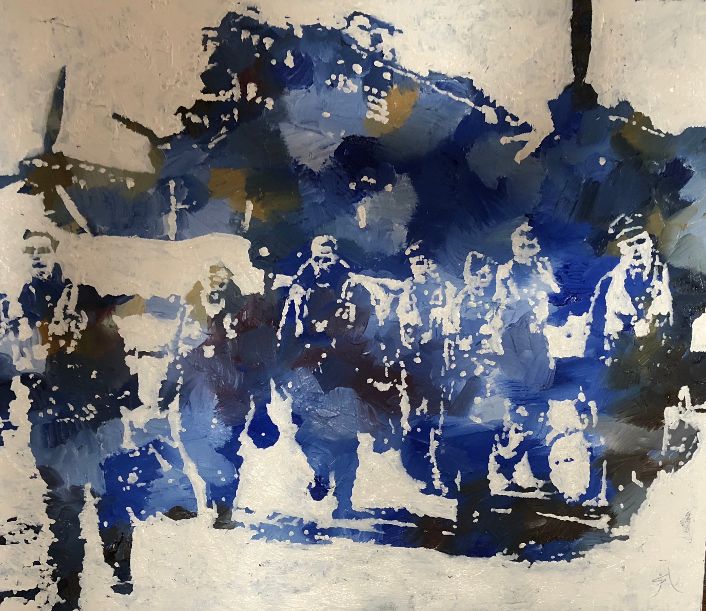 Elkington, Farnes and Neil all retired retaining the rank of Wing Commander with Wellum remaining a Squadron Leader. Their wars straddled six years and the globe. Farnes was based in Kent, then Malta, and finally Iraq for the last three years of conflict. Elkington, whom everyone knew and knows as Tim, once bailed out over the south coast, his life saved by a fellow pilot who provided a slipstream that carried him away from the sea over to relatively safe land. Within weeks he was airborne again. Wellum joined up ten days after his 18th birthday. He served from 1939 to 1961. Neil’s service extended to 1964. His war also included a bail out. Plus the small matter of a round trip from Malta to Britain, via the Middle East, West Africa, that continent’s southern tip, and Canada, finally home after three months.

The navigation maps they used for such treks, raids and flights were plastic-coated so marks from their wax pencils could be wiped away with a handy rag in preparation for the next scramble. For my sketches I also used a wax pencil. On paper, this meant no mistakes for me. There were more margins for error with a watercolour of Winston Churchill that I painted to complement the sketches. Of course, those being sketched had, back in the day, little scope at all for slip-ups.

​The choice of wax pencil was partly because none of those sitting wanted to be painted. To them, that would mean a fuss. Such pomp is not for this group of men who, to the naked eye, seem as normal as the next, and whose modesty is as innately them as was their bravery in our darkest hour. Instead they preferred the simplicity of a sketch and an absence of ceremonial dress and the many medals they have rightly earned.  Better than anyone else can imagine, they know how lucky they are to be still with us. Especially the bombers; better paid than fighter pilots, on the basis that the odds against a successful return home were significantly longer.

My brief was no more than to sketch. My blessing was that we did also talk, benefitting me certainly, in that, for me, the conversation informs the picture. Sketching is effectively my note taking. Some whom I sketched would be interested about the work in progress. Others were ambivalent. More important to many of them was that I represented a chance for them to pass on respects and best wishes to former colleagues. Who else have you seen, I would be quizzed? Who is next? At the advanced stages that they are in their lives, they see less and less of former crew mates. I would mention that I was seeing someone in a few days or weeks time. Pass on my best to them, I would be asked, with some urgency. 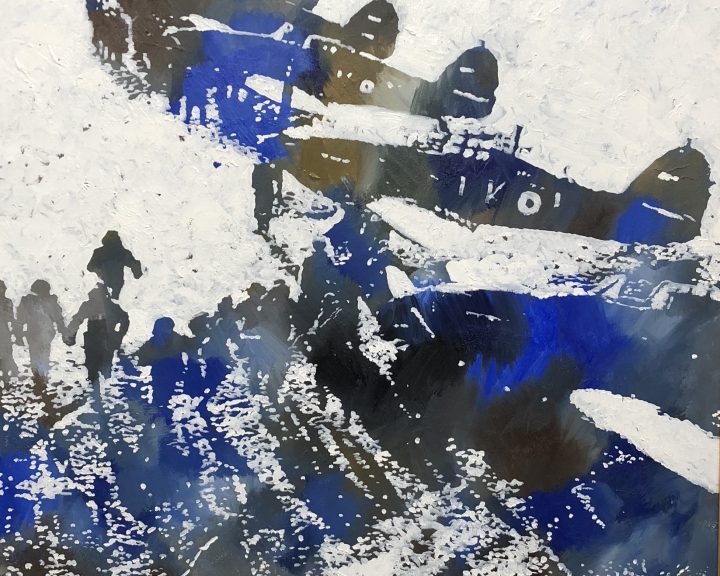 Sittings would last a couple of hours. When flying back from missions those on board aircrafts would look for landmarks as signs that they were almost home. The sight of Lincoln cathedral has rarely raised anything quite like the smiles on the faces of those men, as the spire became part of the horizon. My own return journey to my studio would be with a rough sketch that would form the basis for further versions and finessing of expression, while their words resonated in my mind. The final sketch of Farnes has him attentive and forward looking, while Elkington is less forthright, leaning back, more reflective. In Neil’s eyes there is pride and his face has a half smile. Wellum has some traces of fatigue but I hope these are blended in with satisfaction he is right to feel of his war efforts. A job well done. His, certainly. Mine, hopefully.

Johnny Johnston’s own devotion to the cause almost cost him the opportunity to marry. This was due to happen when he was on precious leave. But within days of his nuptials pending, the respite was cancelled. His commanding officer stepped in. There had to be limits to the inconvenience and collateral of war. The marriage went ahead. Such was wartime.

Johnson remembers and shares so much of the detail; the bacon and eggs that Squadron 617 had on the afternoon before their mission which changed the course of the war, a late switch of plane, landing after their raid of raids with a burst tyre from a bullet that, from passing through the landing gear continued on puncturing a wing before ultimately ending up in the roof above the navigator. Back on the ground at the air field, the plane’s disrepair was a source of disappointment (with the returning crew on the end of some words that you may struggle to find in the bible). At least the bullet avoided any petrol tank.

Amid the sketching, we touched on the courage required of every airman. Though plenty did enjoy a stiffener of liquid resolve, Johnson, himself, didn’t drink much. His father, a farmer, would often fall asleep during the round-the-clock lambing season with a bottle of pale ale left open and undrunk. The smell of this put a young lad of alcohol for many years to come. So Dutch courage wasn’t an option for him. Anyway, that was only so much use in the sky. The courage of Johnson and his colleague was much more ingrained. Natural courage, as Johnson puts it.

​Johnson remembers looking down on the surrounds of Ruhr valley, after the dams were burst. To his eye, land had become sea.  Today, Geoffrey Wellum lives at Land’s End, where coast meets ocean. On the day I travelled to his home there was a storm brewing. The wind blew a gale. The rain lashed down. A hard drive, by any standards. That is for those of us in the modern day, and peace time. I asked, whether the Last of the Few & The Many flew in such conditions. Oh, yes, Wellum assured me. Absolutely.

Most vividly, Johnson – like Wellum, Farnes, Elkington, Neil, and others I sketched – remembered the cold. Up in the skies, the air was freezing, minus many degrees. Can you conceive of the challenges they faced and then consider executing them in planes without heating and at temperatures that were subhuman?  Yet another aspect that is so hard to imagine, particularly as the warmth of these  gentleman to me is something that I shall never forget. 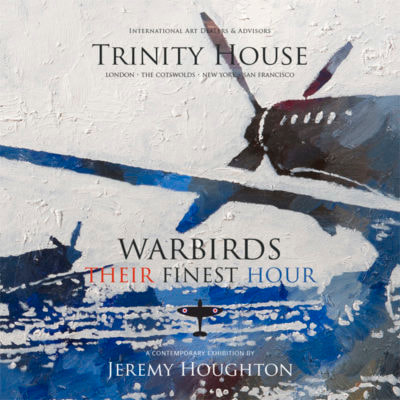 CLICK ON THE IMAGE TO VIEW THE EXHIBITION CATALOGUE
Jeremy will showcase his latest work in collaboration with the RAF Cadets for the historic Centenary of the Royal Air Force at Trinity House Modern in Broadway from Monday 19th November 2018 - Monday 26th November 2018.