Born out of boredom and frustration, BBC Three's This Country is a perfect portrayal of a life in a Cotswolds village that the tourist board would rather you didn't see. The Cotswolds Gentleman caught up with Charlie Cooper to discuss cleaning, Cirencester and "Kurtan" Mucklowe.
It's the day that the 4th episode of This Country airs on BBC Three and I'm sat in Made By Bob in Cirencester eating breakfast with Charlie Cooper, now known to millions as Lee "Kurtan" Mucklowe. "It's absolutely surreal" he expresses talking about the incredible reaction that the show has received. 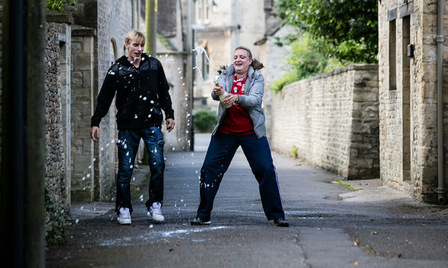 Set in Northleach, This Country focuses on the desperate lives of cousins Kerry (played by sister Daisy Cooper) and Kurtan Mucklowe as they search for things to do to pass the time in their rural surroundings. This includes anything from making scarecrows for the village scarecrow festival, fighting over the oven and searching for people from school.. These sadly are the most important things to Kurtan Mucklowe.

How on earth is this funny? A sublime script, lot of which that makes the final cut is ad-lib, and equally sublime acting help. It is just horrifyingly real.

​"All the characters are based on people we know" explains Charlie. "Mandy (the tattooist in Episode 2) is a woman who my mum knows who is actually called Mandy! She has seen the show and loves it! We didn't have to look far as all the things you see have either happened to us or people we know!" Even your house getting plumbed? "That happened! My dad used to have a tree outside our house and chase kids away. They used to come back and cover our house!" And the "tomato" scene (if you have seen episode 3 then you will know what this is)? "Yep. That was a mates mum who used to work at Subway when explaining an Italian BLT!". He's really not lying. This is just everyday life brilliantly captured. The actor who plays Slugs is actually the guy who they based the character on. Kerry's dad is actually their dad in real life and Charlie and Daisy's chemistry in front of the camera is something that couldn't be replicated by two standard actors. "We always know what the other one is going to say so can play off each other and we were always fighting which is why they probably look so real. She always pulled my fucking hair!"
This Country was born out of boredom and frustration and a lot of hard work and sacrifices that Charlie is too modest to actually say. "Daisy was at RADA, living in London and was homesick and I dropped out (he got kicked out) of University (where he also befriended a group of nerds and was respected by them as he was a little alty and not full nerd- see episode 4!) so I went to live with her and slept on her floor for a while. We just talked about all the people from home who made us laugh. She created the character Kerry which became popular on YouTube and in 2014 managed to get a pilot. It never worked as they wanted to take the character in a different direction to what we wanted. It was pretty tough to be fair!"
After a period of both living back in Cirencester with their parents, the pair continued to work on the characters while taking jobs around the town as cleaners and in a pub. "We were bloody awful cleaners! Honestly, we actually used to do about 20 minutes work out of the 2 hours we were supposed to do. I actually ended up feeling sorry for our boss who started leaving us notes in the cleaning cupboard!" The situation that they both found themselves in isn't too dissimilar to that of their characters. "They are just extended versions of ourselves. It was hand to mouth and luckily we had support from our parents, not financially, but being able to offer us a base to write. Without that we would have been screwed"
It is amazing to think that Charlie has had no acting experience when you watch the programme. "Daisy had some bit parts in a couple of programmes including The Other Man with James Corden and met Matt Baynton who introduced us to Shane Allen, comedy commissioner at the BBC, and producer Simon Mayhew-Archer who loved the script and got the idea. It developed into a mockumentary from there."

In September 2016, filming begun in Northleach. "We originally wanted to film in Cirencester. This was just one of many mistakes we made. We did a reccy of the Cotswolds looking for places to film and saw Northleach as the perfect location."

​Fast-forward to February 2017 and the show got its first airing on BBC Three. People tuned in not knowing if what they were seeing was actually real or fake. The show is full of huge laughs yet layered with sadness, loneliness and loyalties that are often found in the invisible underbellies of society. "We literally just kept truthful which is why it is so believable" he explains.

The reaction to the programme has been phenomenal. "Russell Brand tweeted.. to 12 million followers. It's ridiculous!" Just one of many tweets heaping praise on the duo. A second series, and a Christmas Special (which has the potential of being incredible) is surely on the horizon. "We should find out before the end of the series" he says. "We have so many ideas!"

​This is the end of five years on a project that they have put their heart and souls into and hopefully the start of something very special indeed.
​
Click HERE to watch the first 4 episodes of This Country